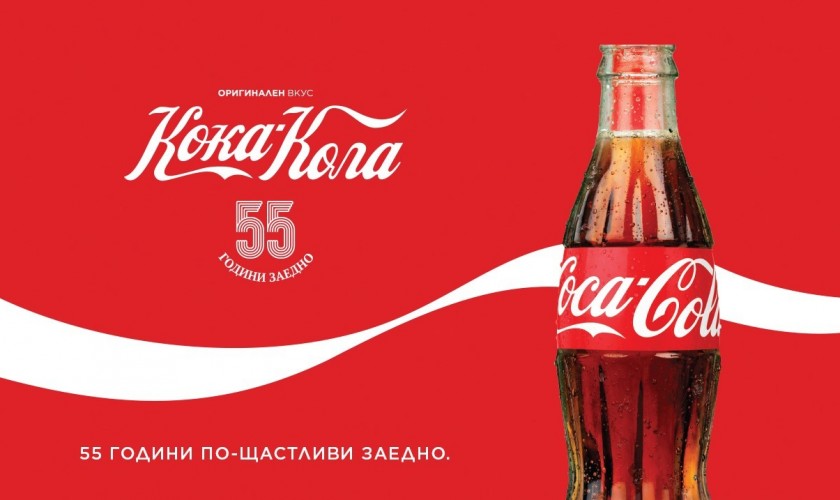 The dynamic 2020 coincides with the 55th anniversary of Coca-Cola in Bulgaria. The production of the iconic beverage in Bulgaria started in 1965, and this was the first time the logo was presented in the Cyrillic alphabet. 55 years later, firmly convinced that over these years each and every one of us has made their own memory related to Coca-Cola, The Coca-Cola System in Bulgaria invited 55 inspiring personalities, some of whom celebrities, influencers, employees and partners, to tell a fond memory related to the popular beverage. They will have only 55 words to do this, as the most important and emotionally charged words are the ones for which it is worth sacrificing all other words.

The stories in the campaign are personal, professional, abstract and independent of each other but when told together they become a kind of illustration of the fascinating history of Coca-Cola in Bulgaria, and most of all - of the people who are part of it. A history dating back 55 years and a history that is being written by the company every day, together with its partners, customers, employees and ambassadors.

The “55 years Coca-Cola in Bulgaria in 55 stories of 55 words” campaign is aimed at gathering some of the most affectionate Coca-Cola memories, amusing stories and special moments, shared by inspiring Bulgarians, popular in the field of television, cinema, literature and the musical stage, as well as by key employees and valued partners of the companies of The Coca-Cola System in Bulgaria. Among the 55 emotional stories the fans of the beverage will find the stories of Mihaela Fileva, Grafa, Krisko, Tita, Lyuben Dilov Jr., Maria Ilieva, Mila Robert, Iliyan Lyubomirov, Niki Kanchev, Geri Turiyska, Orlin Pavlov and many others.

Employees of different departments, roles and layers of The Coca-Cola System in Bulgaria will also take part in the campaign. Some of these employees have been part of Coca-Cola in Bulgaria for 20 or more years, some had worked for the system in Bulgaria and later continued their career development in foreign markets and currently hold high level positions there but have left a legacy with their presence and work.